For more details about my training on how to read Tarot, please click here

For further information about Tarot or if you want to book an individual Tarot reading, please see below:

For all general information on my prices please click here. 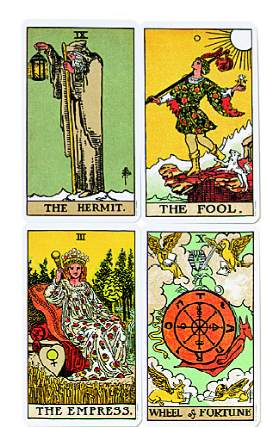 What is the history of Tarot?

The 78 cards of the modern tarot deck are made up of the Major Arcana and the Minor Arcana (meaning "big secrets" and "little secrets"). We know that decks of mystical, numbered cards existed in India and the Far East and were probably brought to Europe by the Knights Templar, during and after the Crusades to the Holy Land. Actual tarot decks probably appeared in Europe in the early 14th century and seem to have been a combination of early Italian four-suited playing cards and the 22 Major Arcana. Antoine Court de Gebelin, an 18th century occultist and freemason, was convinced that the Major Arcana cards were derived from an ancient Egyptian book of mystical wisdom, remnants of the Book of Thoth (the Egyptian god of mysteries and magic). Gebelin devised his own deck using 77 cards + The Fool, to make 78 cards in all. These were based around the mystical number, 7 (Major Arcana 3 X 7 + The Fool, numbered 0; 4 suits of 2 X 7 cards). The designs that accompanied his book became the foundation for many later traditional decks. 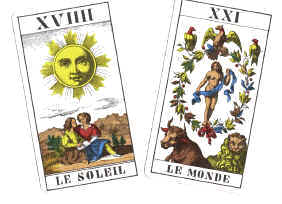 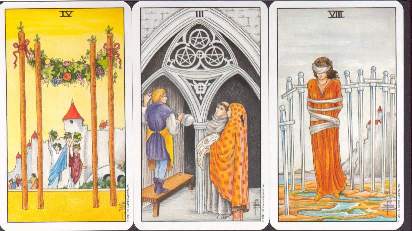 The 19th century saw a revival of interest in the occult, magic and mysticism. Towards the end of the century, Dr. Arthur Edward Waite developed and designed his own unique tarot cards, now called the Rider Waite deck, with the help of artist Pamela Coleman Smith. In 1903, Waite took control of one of the most influential occultist groups of the Victorian era, The Holy Order of the Golden Dawn and printed the Rider Waite deck in 1910. The Rider Waite deck incorporates Egyptian, Kabbalistic, Christian and astrological symbols, whilst including symbolic images for each card of the 4 suits, rather than leaving them as playing card pips, as in the Marseille deck. Since that time other tarot decks have also gained popularity, including the Crowley or Thoth tarot, the Universal deck, the IJJ tarot and the Crystal tarot.

Why have a Tarot reading?

Many people choose to have a tarot reading if they are at a crossroads in their life; if their life is in transition; if they feel that they are stagnating; if they are changing jobs; starting or ending a new relationship; wanting guidance about a difficult issue. The tarot is a potent guide in helping a person to draw on their intuitive sense, to allow them to "know" what they really want in life and to act upon that knowledge. In many ways it acts as a mirror to the self, to see the truth about oneself, to provide a series of stepping stones to self-discovery. It is certainly not evil or anti-religious but is the key to inner wisdom and hidden self-knowledge.

What should I expect from a Tarot reading?

Your tarot reading should last about 75 minutes. It is carried out in a quiet environment, with lit candles, soft music and pleasant aroma fragrances. I always start with a 5 minute meditation, so that you have a chance to relax, still yourself and reach a point of calm. This allows you to select cards from a point of intuition and not from a position of neediness. If you have specific questions that you wish to ask of the tarot, then please make sure that they are positive and accepting of your own responsibility for your personal choices.

As a spread, I tend to use the Celtic Cross, that explores past influences, unknown influences, challenges, approaching influences, hopes and fears, the "you now", inner resources and outcome. However other spreads are equally valid, such a "The year ahead", "The chakra spread", "The zodiac spread". I do not use reverse cards (all cards are placed in the upright position), as I believe that the symbolism of tarot cards naturally shows the archetypal energy that reflects your situation - what is lacking, what is needed, whether an energy is passive, dormant or active. 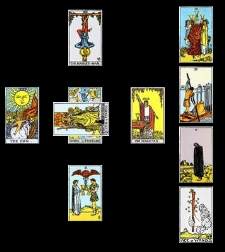 I use the tarot, together with my energy channelling skills, to offer practical interpretations of past, present and future situations. Please remember that tarot teaches emotional honesty; it can be the most revealing mirror of you. It can lead you on a journey of personal development and self-discovery, empowering you to take control of your life. It enlightens and highlights your abilities. It invites you to explore your own deeper understanding of your situation in life, in order to gain a clearer insight into how to make the best possible decisions in the future.

Length of Reading: about 75 minutes

Please note: Any advice given must not be in place of professional, legal, financial or medical help. Tarot readings should be considered for entertainment purposes only.